The places to visit are: 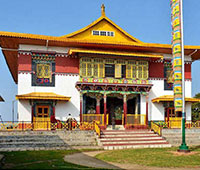 Pemayangtse is situated in Pelling, around 6 km from Gyalsing, West Sikkim and commands an impressive view of Mount Khangchendzonga. It was originally a small Lhakhang built by Lhatsun Chempo in the 17th Century. Later during the rule of the third Chogyal Chakdor Namgyal, Jigme Pawo, Lhatsun Chenpo's third reincarnationextended it and rebuilt the structure. It is perched at a height of 2085 mts and is the second oldest and perhaps the most important monastery in Sikkim. This monastery belongs to the Nyigma order and all other Nyigma order monasteries in Sikkim are subordinate to it.

The monastery houses numerous religious idols and other objects of worship, most of which are precious because of their antiquity. On the top floor of the monastery there is a wooden sculpture depicting the Maha Gurus Heavenly Palace "Sanghthokpalri". This master piece was completed by the late Dungzin Rimpoche, who took five years to craft it single handed.

The main festival of the monastery is on the 28th & 29th day of the 12th month of the Tibetan calendar, normally corresponding to the month of February. During these two days religious dances are performed and pilgrims come from all over Sikkim to watch them. Dressed in costumes of rare magnificence, the Lamas represent Mahakala and Guru Drag-dmar. The dance ends on the third day with the unfurling of the `Ghyo- ku' - a gigantic embroidered Buddhist scroll as the devotees bend down in homage.

The second oldest monastery, it is situated at a height of 6,840 ft is the head of all others and belonging to the Nyingma-pasect. Presenting a gorgeous view of the mountain ranges, it is now equipped with 50-bed Tourist Lodge catering to travellers who want to visit this ancient and holy place which is an ideal base for those who would like to explore the unspoiled charms of the neighbouring spots and trek to Yuksom and Dzongri. 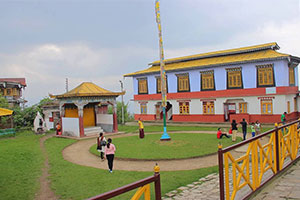 The main hall has an area of 1500 sq.ft. The monastery houses religious idols and priceless antiques. On the top floor of monastery there is a wooden sculpture portraying the Mahaguri's Heavenly Palace Sangthokpalri. The main festival is on the 28th and 29th day of the 12th month of the Tibetan calendar, normally corresponding to the month of February.

Rabdanste, which is couple of kilometers from Gyalshing bazaar and near the Pemayangtse monastery, was the second capital of Sikkim and was established in the late seventeenth century by the second Chogyal of Sikkim. It was abandoned towards the end of the eighteenth century because of the threat posed by the Nepalese and the capital was shifted to Tumlong. The Rabdanste Palace is in ruins and one has to trek about two kilometres from the main road near Pemayangtse monastery through a thick forest to reach it. The chortens around the palace have however withstood the elements of nature. The ruins are now being preserved by the Archaelogical Surnvey of India and have been declared as a monument. 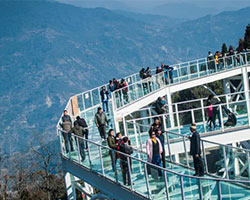 A quiet village in West Sikkim houses the famous  Pemayangtse Monastery and has now turned into a bustling tourist destination and has come up with numerous hotels and lodges.
From here one can view Mt. Khangchendzonga, Pandim, Siniolchu and other ranges. At The hillock is Pemayangtse monastery, the sublime lotus, the premier monastery in Sikkim belonging to Nyingmapa sect and is head of all other monasteries of the sect in Sikkim

This was the second capital of the erstwhile kingdom of Sikkim after Yuksam and till the year 1814 A.D., the king of Sikkim had ruled the state from this place. Today, the Rabdentse ruins lie hidden from the main road at a walking distance from the tourist lodge and the Pemayangtse monastery. It can be approached by following a footpath which branches off the main road.
The scenic view from the top of the ruin scanning across deep valley to the mystic heights of Khangchendzonga ranges is something to be cherished and etched in memory.

Built in 1697, Sanga Choeling means 'the island of esoteric teaching'. 45 minutes walk from Pelling and 7 km from Pemayangtse will take you to this second oldest monastery in Sikkim. A 4 km trail rises from the playing fields just above Pelling to reach the small monastery of Sanga Choeling is one of the oldest gompas in Sikkim. This gompa is another of Lhatsun Chenpo's creations, and is highly venerated among the Nyingmapa. Gutted by fire, it has been rebuilt and houses some of the original clay statues.

After an hour and a half drive from Pelling, one comes across the twin Khangchendzonga Water Falls. On the way to Yuksom, it is a place not to be missed by tourists for its breathtaking beauty and grandeur.

Distance - 124 km( from Gangtok ) ; 40 km ( from Pemayangtse )
Altitude - 1780 m
The hamlet of Yuksam is set amidst pristine hills and lakes, where according to the historical records and it was here in 1641 AD the first Chogyal (King) Phuntsok Namgyal of Sikkim was consecrated by the three wise lamas. Yuksam literally means the meeting place of the three learned monks. This was the first capital of Sikkim. The Norbugang Chorten and the Coronation throne are the silent witnesses to the event of 1641. This quaint little village is also the starting point for all the treks into West Sikkim like Dzongri and Goechala.

This was the monastery established soon after the consecration ceremony of the first Chogyal. The monastery is located on a hill top above Yumsom surrounded by verdant forest. It can be approached by trekking only, negotiating steep slope for about half an hour. It is an ideal place for lamas seeking meditation recluse. 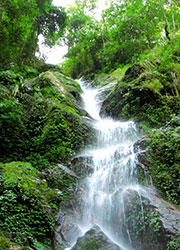 Located between Yumsom and Gerethang this highest waterfalls of West Sikkim presents a magnificent scenario especially during Monsoon. A gentle footpath takes one to a viewpoint for a closer view of this mighty discharge of water. A cafeteria is being constructed for the benefit of tourists and the picnickers.

Distance - 15 min walk from Yuksam
True to the prophecy of Tibet's founder of Buddhism, Guru Rimpoche, some nine centuries prior, three learned Lamas, Lhatsun Namkha Jigme, Kathok Rigzin Chenpo, Nga-Dak Sempa Chenpo, gathered at Yuksam in 1642 from various directions and enthroned Chogyal Phuntsog as the first religious king of Sikkim. A stone throne shaded by a 300 year old fir still stands here today. A foot print in stone in front of the throne is said to belong to Lhatsun Namkha Jigme, and a nearby chorten (stupa) contains soil and water from all over Sikkim. Thus Yuksam occupies an important place in Sikkimese history as the first capital, and Norbugang as an historic cultural site maintained by the Archeological Survey of India. Norbugang is easily reached on a 15 minute walk from Yuksam.

Also known as Kirateshwar Mahadev temple, it is situated on the banks od Beautiful Tangeet river. A foot suspension bridge takes devotees to its attractive location. People from all over the state visit this holy place of eminence. According to popular belief, whosoever worships here will earn virtues of two life times. The festival of the temple takes place in the month of November known as the Bala Chaturdesi. Legship also houses the first ever built dam in the state for hydro electricity purpose. The water accumulated in the dam is used for Rangit Water World and local folks come here for picnics and rafting.

About 16 km away from Yuksam and about 40 Kms from Gyalshing, via Legship is this important monastery belonging to the Nyingmapa order. It was built on the top of a hill that looms up between the Rathong river and the Rangit river, where a rainbow emanating from Mount Khangchendzonga came to an end. At first only a small Lhakhang was built by Ngadak Sempa Chempo in the 17th Century. The main monastery was built by Pedi Wangmo during the reign of Chakdor Namgyal and some of the statues built then still exist. The sacred objects of worship in Tashiding are the chorten Thongwa Rangdol and Bumchu( holy water). The chorten was built by the Lhatsun Chenpo and it is believed that merely to view the chorten is enough to cleanse one of all sins.Carved skillfully on flagstones surrounding the monastery are holy Buddhist mantras like 'Om Mane Padme Hum' by the master craftsman Yanchong Lodil. 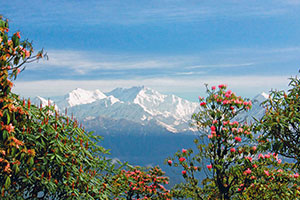 Altitude - 10500 ft.
Located in the extreme west is noted for rhododendrons. It's a huge Rhododendron forest, is a must visit experience trip during the flowering season from mid march to April end. The whole forest is aflame with riot of Rhododendron Flowers with hues raging from blood red to pure white and against the back drop of the mountains its truly an unforgettable experience