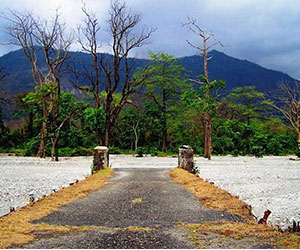 The Gate Way of East India, The North Bengal is the natural mine of treasure hunt of the nature lovers. The area surrounded by international boundaries of Nepal, Bhutan and Bangladesh. It is also surrounded by the Himalayas on one side – the treasure of natural beauty and the planes with historic importance and the furious hilly rivers and fountains. And the southern side is vast Gangetic plains.

The history, culture and landscape of six districts of North Bengal are the exotic blend of different cultures, which is a treasure, and fetches immense tour lovers year after year.

The landscape, history and cultures of each district have a distinguished character. While nature has showered his bountiful beauties in Darjeeling with great Himalayan ranges passing through it, Jalpaiguri, lying in the sub-Himalayan foothills, presents a rich biodiversity with dense forests, milky Himalayas and eco lives. Coochbehar, the city of palaces of Koch Kings. It also surrounded with temples and ponds of historical value. Malda is famous for the old Gour kingdom.

Tourism has unleashed the beauty of North Bengal to the world. It is proved through not only visits by the foreign tourists, but also from tourists around the country. A what not tourist area consists every entertainment namely luxurious leisure tours, adventurous white water rafting, daring high and low altitude treks, jungle safaris, elephant & yak safari, ethnic / cultural tourism, heritage tour etc.

The places of visit are:

Other than these major tourist spots Dooars also has the following destinations to visit. 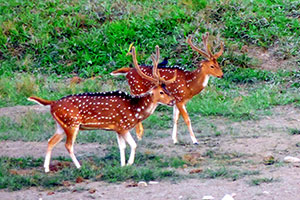 Around thousand yeas old fort of the Nal King, deep inside the Chilapata Forests enriches the historical and archeological importance of the place. This can be sighted on way to Coochbehar. The trip through the deep, dark and fearing Chilapata Forest (near Alipurduar) is a pleasant experience. Built in the 5th century during the Gupta Empire the ruins still recall the memories of the Golden Age of India.

There is a huge lake for eco-tourism activities near Coochbehar on the way to Barovisa/ Kamakshyaguri. The place also reachable through Alipurduar (approx 75 KM). It is on the train route of Alipurduar to Kamakshyaguri. The major attraction is variety of birds around the place. Birds like cormorants, different varieties of storks, ibis, kingfisher, spoonbill, owl etc. There is a dear Park, a crocodile rehabilitation center at Rasikbil. The place of Historical importance and establishments are also can be seen in nearby Coochbehar.

Bindu, around 110 km drive from Siliguri, famous for its cardamom plantation, situated at an altitude of 700m, on the India-Bhutan border. It is coming up as a popular tourist destination in Dooars. Bindu lies in between the high mountains Jaldhaka River singing by the side through the valley, making a natural border within India and Bhutan. The journey is enriched by scenery of lush green tea garden and dooars forest. 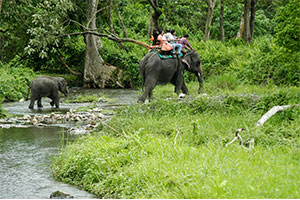 Jaldhaka (1500ft) is a good tourist destination, situated by the side of river Jaldhaka (De-chu of Bhutan). Two ways one can go to the place, via Siliguri (90Kms) and via Kalimpong (135Kms). Though situated on the hill section of Gorubathan under Kalimpong sub-division, it is separated by a mountain ridge descending south-west from Reche-la and is separated from Bhutan by the Jaldhaka River. The hydro-electric power project is added attractions beyond the natural surrounding. Jhalong is in bit higher altitude from Jaldhaka and a place worth visiting.

Dooars have a host of many more destinations which include Madarihat, Chapramari and Murti to just name a few. Tours can be arranged on your requests.

Buxa Tiger Reserve Forest It is situated in the of Alipurduar, Jalpaiguri district, the north eastern corner of West Bengal, surrounded by Bhutan and Assam. It is declared a National Park in Jan’1992....

Cooch Behar It is stated by some that the ‘Koch’ dynasty followed the lineage of Nilambar. But the most widely accepted view holds that king Maharaja Viswa Singha was responsible for establishment...